In the world of Google, a lot of last week was focused on Google I/O, and I’d like to outline all the important announcements here! We also had a GDG (Google Developer Group) Summit in Mountain View.

This is part four in the Last Week at Google series.

Google I/O was two packed days of interesting, fun, inspirational and mindblowing! You can watch the videos of the keynote and sessions right now for the full stories.

A whole slew of things were announced, and here’s a quick run-down. 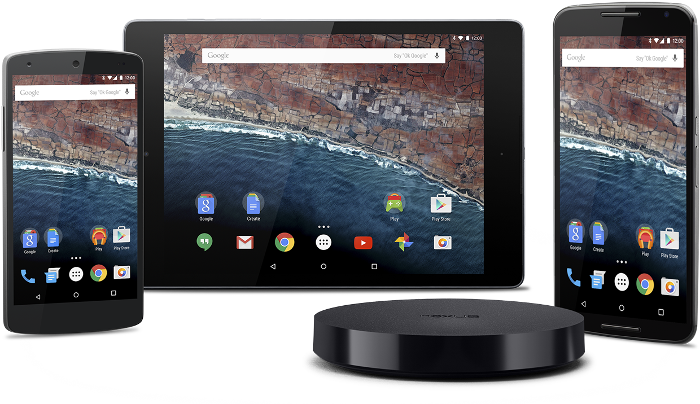 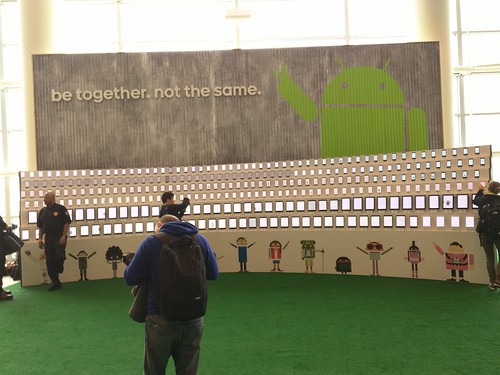 One of the main updates were the ways permissions work, and have been simplified, in Android M. Permissions are now being asked for on a needed basis, a vast improvement from before when users had to pre-approve a long list of permissions. This means that you will only be asked for permission when you try to use certain functionality in apps requiring that. This also means that updating your apps will be much easier, since you don’t have to approve a lot of new permissions. 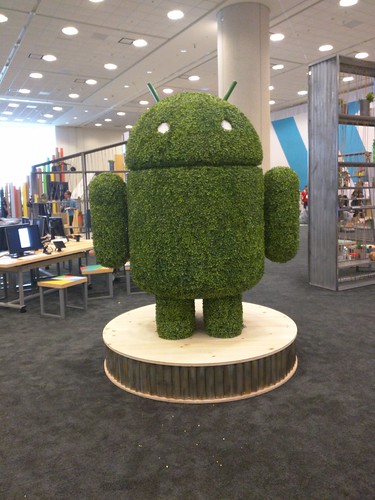 Doze is a new power-saving mode in Android, where it tries to keep the system in a sleep state, if it’s being unused. When in Doze mode, network access is disbaled unless for Google Cloud Messaging messages, WiFI scans are not performed and more.

Android M has easier text selection with also offering the copy and paste in a floating toolbar in context.

Chrome Custom Tabs are implemented to address the use case of, from within apps, launch a browser or create an in-app browser. They are there to offer a more seamless experience and to avoid the need of using a WebView, and also offers customization such as toolbar color, animations when entering and exiting and offering custom actions in the toolbar and overflow menu.

Google Now is becoming accessible throughout Android with Now on Tap. Just hold down the home button and you’ll get Now cards directly in your context with relevant information. One example if you get an e-mail with movie information, and you can get Now cards with information about the movie, its actors, IMBD information, trailers and much more. 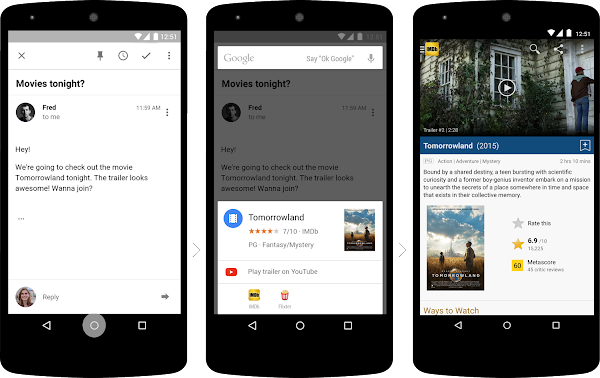 One take on this and its meaning was that Google’s Minor UI Update Is Solving The Biggest Problem On Smartphones Right Now.

More by Aparna in this video:

Google Photos has now been turned into a separate product with unlimited storage for your pictures and videos! The only criteria/top limit is 16 megapixels for photos and 1080p for videos.

It’s available on Android, iOS and the web. On mobile devices, a very simple pinch and zoom gesture will change the view; from day view to month to year. A couple of the standout features are the Assistant and, maybe not surprisingly, the Search.

The Assistant creates a number of automatic animated GIFs, Stories, Movies and more from your uploaded pictures and videos, and if you like them, you can add them to your library.

The Photos Search is the most impressive part, where you can have your pictures automatically categorized – no tagging needed – by People, Places and Things. People is by persons in your pictures, Places are geographical places and Things can be Sky, Mountains, Beaches, Sunsets and much more. 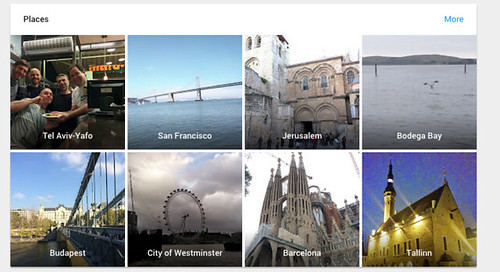 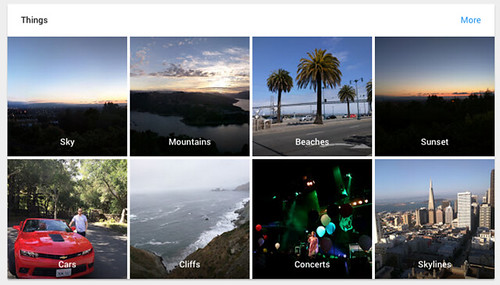 I consider it the best photo backup-and-sync cloud service I’ve tested — better than the leading competitors from Apple, Amazon, Dropbox and Microsoft.

To get started, and to answer the questions you have, I recommend the Google Photos Help Center.

Given that far from the entire world is connected, or have good connectivity, Google Maps have started true offline functionality, including search autocomplete, turn-by-turn directions, reviews and more.

Internet of Things is upon us and we see more and more connected devices and things. The idea with Project Brillo is to extend the Android platform to all your devices, so they work seamlessly together and with your mobile phone. It also introduces Weave, the IoT protocol for everything.

We announced Android Pay, where you can use the device of your choice, associated to a credit or debit card, and just pay on the go. It’s based on a number of collaborations and availability, and WIRED wrote about it in Why Android Pay Will Succeed Where Google Wallet Failed.

A new version of Google Cardboard was announced, offering compatibility with larger 6″ phones and has in this version removed the magnet in favor of a cardboard button that will work with all kinds of phones. This, and the SDK being available for iOS as well, means that this will be by far the simplest and least costly way to get as many people as possible to be able to have VR experiences.

Together with this, Google also spoke about Expeditions to bring VR experiences to school children, and Jump, making it possible to capture the world in VR video and then easily share it.

Google’s ATAP (Advanced Technology and Projects) group announced a number of interesting things, and I wrote about a couple of them in more detail in Project Soli And Project Jacquard – Google ATAP’s Mind-Blowing Projects. You can watch their entire presentation video:

I also ended up in Mashable’s main article picture on Project Jacquard: 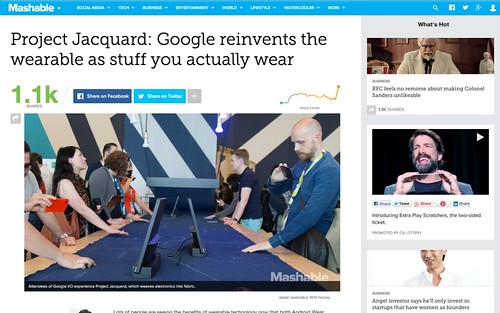 And this was the view from my angle: 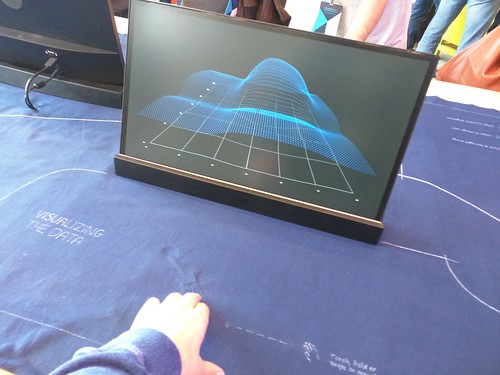 Other announced projects were:

Project Ara is a very interesting approach to mobile phones, and making them more modular. At Google I/O we got to see a great demo where a device without any camera support got one put in, on-the-fly, was automtically detected and just worked directly to take pictures.

i just got chills with this project ara demo — he booted the phone WITHOUT the camera module and then added it after pic.twitter.com/j3NDOcEKAT 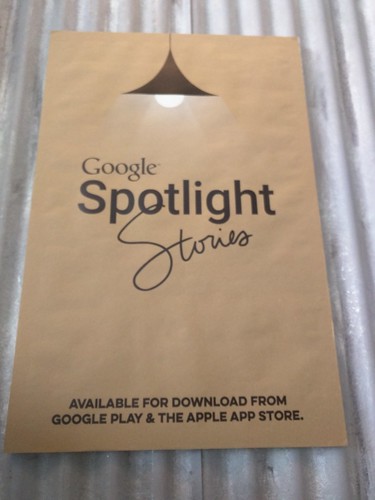 Google Spotlight Stories is offering movie creators and viewers movies in 360 degrees, being able to use your mobile phone or tablet to see a movie, look around and get all the surroundings and actions. Very cool!

The Verge wrote more about it in Google’s incredible, immersive Spotlight Stories are coming to YouTube.

Project Vault is basically a small computer on a microSD card to make lives easier for users to communicate more securely and for authentication without passwords.

If you want to delve deeper into it, ProjectVault is available on GitHub.

Put in a nutshell, Project Abacus is about killing the password. It’s a multi-modal system that registers your behavior over time to as securely as possible being able to verify that it is just you that is using your device.

Additionally, the Codelabs from I/O are now available online.

This was an overview of the most high-profile announcements, and there were many more on Android Wear, Andrpid Auto, Chrome and other areas. 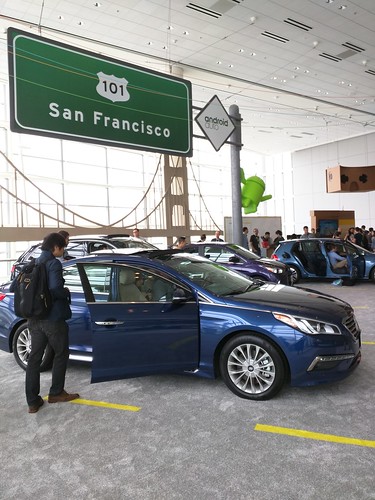 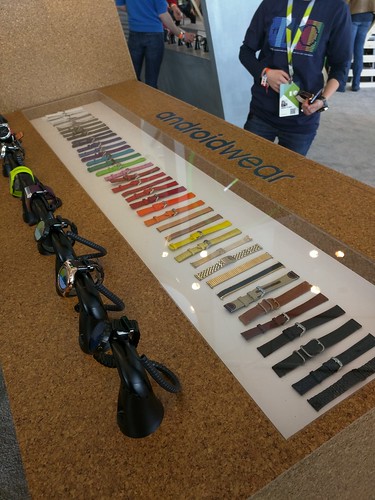 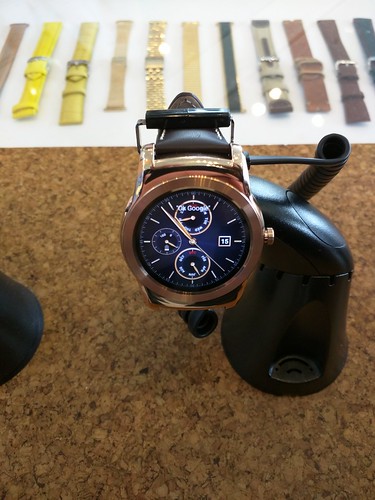 Some of the feedback I heard from people is that they liked it, but some missed more Chrome/Web and Cloud focus. While that’s true, the good part is that there will very likely be another Chrome Dev Summit this focusing solely on Chrome, and for Cloud, they have just started with the Cloud Next events.

Overall I quite liked this year’s I/O and think it was a good mix of needed improvements on Android – maybe not mind-blowing features but they will make lives so much easier and better for users and developers – paired with the truly visionary announcements and ideas presented by Google ATAP.

Google Developer Groups (GDGs) are targeted at developers interested in Google technologoes, and is made up of community organizers and members all over the world. They are currently available in 112 countries and there are currently a total of 654 different ones.

If this sounds interesting, you can join one or start one yourself!

Last week, May 26-27, we brought together GDG Organizers from all over the world to meet each other, listen to presentations, do workshops and much more!

All the above pictures, and much more from my colleague Bill Luan, are available on Google+. 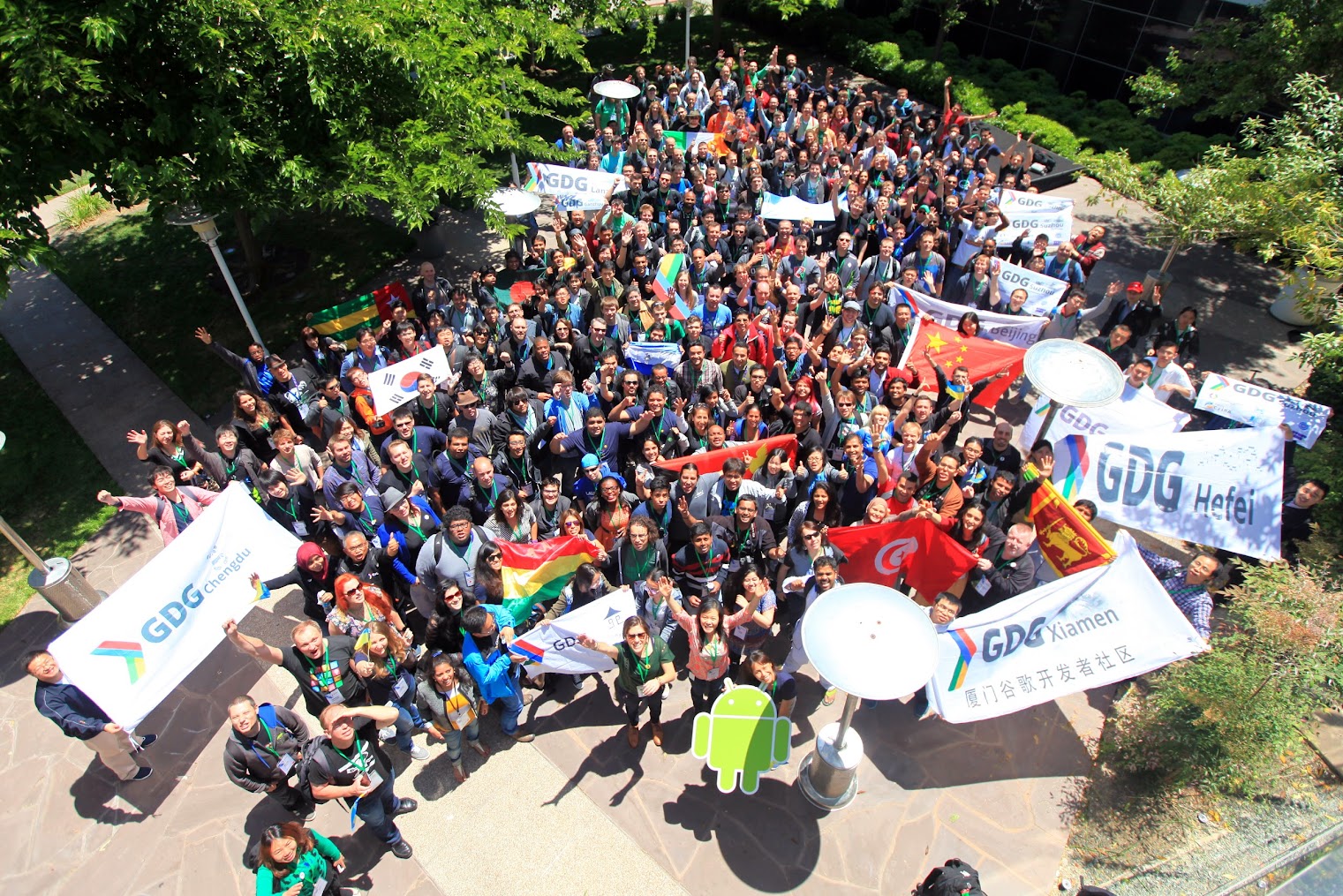 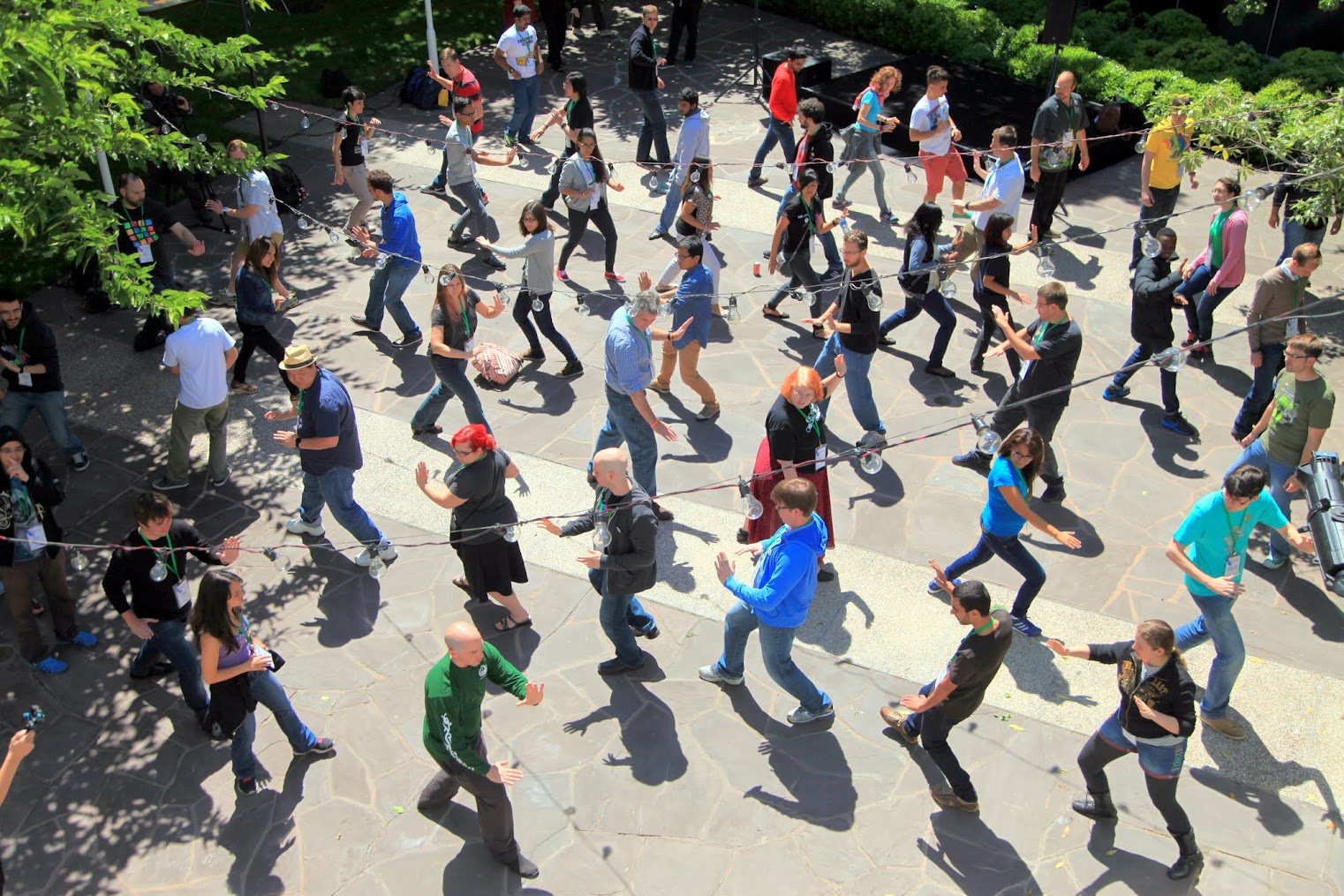